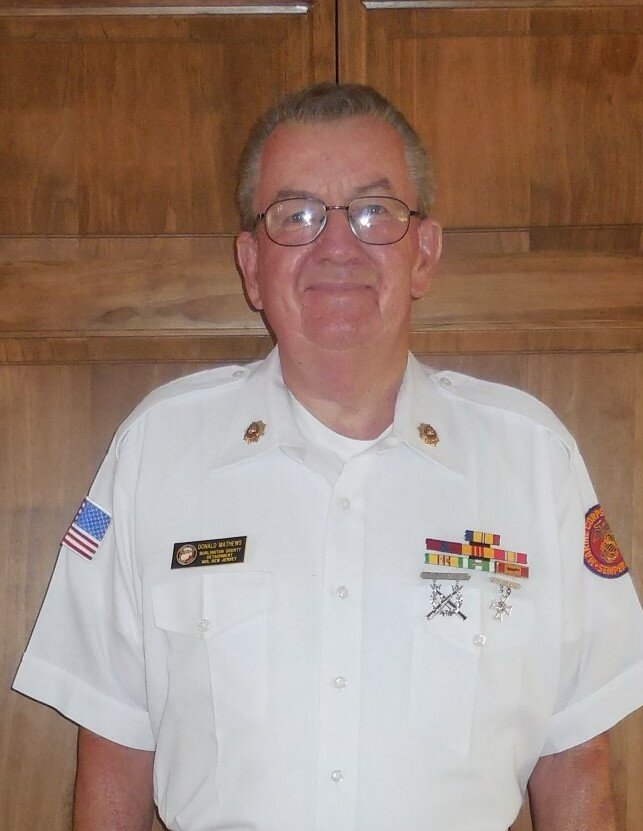 Please share a memory of Donald to include in a keepsake book for family and friends.
View Tribute Book
Donald J. Mathews, Jr., age 75, of North Hanover Twp. passed away Monday, December 6 at Samaritan Hospice in Mt. Holly. Born in Trenton, he has been a resident of North Hanover since 1969 and formerly lived in Chesterfield. Donald graduated from Northern Burlington High School in 1964 after he proudly served in the United States Marine Corps from 1964 to 1968 during the Vietnam War. He worked as a mechanic for Princeton Nurseries and after his retirement there, he then worked for North Hanover Township in Maintenance & Grounds. Donald was a true outdoorsman, enjoying fishing, camping, kayaking, 4-wheeling and trapping. He also raced cars in his younger years and was a member of the Central Jersey Tractor Pullers, the Iron in the Pines 4-Wheelers Club, the Vietnam Veterans of America and the New Egypt Elks Lodge. Donald was a volunteer with the Chesterfield Township EMS and was an active member of the Marine Corps League and their Toys for Tots campaign. He was a loving son, husband, father, pa, brother, uncle and friend who will be missed by all. Donald was predeceased by a son, Donald W. Mathews and his father, Donald J. Mathews, Sr. He is survived by his loving wife of 55 years, Diane (Jones) Mathews; a son and daughter-in-law, Dwayne and Michele Mathews of Jobstown; a daughter, Dawn Goeke and husband Raymond, Jr. of North Hanover; his mother, Rita (Lyden) Mathews of North Hanover; six grandchildren, Gabrielle Bibus, Donald W. Mathews, Eleanor Mathews, Katelyn Mathews, Grace Goeke and Evelyn Goeke; a sister, Patricia Wurpel and husband Richard of Augusta, Maine; three brothers, Carl Mathews and wife Janet of New Egypt, Robert Mathews and wife Lynn of North Hanover and Paul Mathews of North Hanover and many nieces and nephews. Funeral services for Donald will be held on Friday, December 10 at 8:00 PM at the Tilghman Funeral Home, 52 Main Street, New Egypt, NJ 08533. Calling hours will be from 5:00 to 8:00 PM at the funeral home. Burial will be in the Jacobstown Cemetery in Jacobstown. If you are not vaccinated, we ask for you to wear a face covering. In lieu of flowers, memorial contributions in Donald’s memory can be made to the Marine Corps League Foundation (www.mclfoundation.org/donate).
Print
Friday
10
December