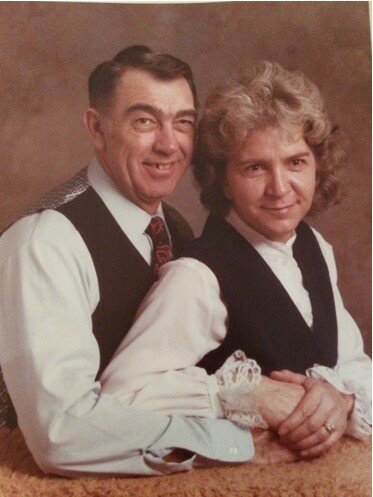 Please share a memory of Donald to include in a keepsake book for family and friends.
View Tribute Book
Donald Claude Conklin was born on May 30, 1930, in Elmira, New York, son of Earl Jack and Julia Avis Conklin. He was the fourth of nine children, six boys and three girls. Donald wore the military uniform for more then half of his 91 years, first with the Army serving in Germany where he met his wife, Gisela. They were married there on February 28th 1953, in Karlsruhe, Germany, and would have celebrated their 69th wedding anniversary at the end of next month. Then he switched to the Air Force and spent 26 years on active duty at various bases, in the US and overseas, including a tour in Vietnam in 66-67, where he flew as a gunner on the C47 ‘Gooney Bird’. He spent 6 years back in Germany, at Hahn Air Base from 67-73, working in Weapons Release shop and later on in Quality Control. He rotated back to the US in 1974 and was assigned to Holloman Air Force Base, in New Mexico. In the fall of that year, he retired from active duty and relocated back to New Jersey where he has resided ever since. It wasn’t long before he was back in the Air Force uniform, after he accepted a job teaching Air Force Junior ROTC, at Jackson High School, in Jackson, NJ. A job he held for the next 22 years. He loved working around airplanes while on active duty, and thoroughly enjoyed making a difference in the lives of the young people who spent their high school years in the Air Force Junior ROTC program. After full retirement he traveled, making multiple trips back to Germany to visit friends and his wife’s family members who still lived there. He is survived by two sisters, Shirley Blanksby, and Marjorie Conklin, and one brother Ralph, his daughter, Deidre, her husband Patrick, four grandchildren, Patrick Simon Jr., Kristin Goedken, Heidi Kuecker, and Joshua Simon; and eleven great-grandchildren, Danielle and Hailey Simon; twins Kelsie and Chloe Goedken, Derek Goedken and Chase Goedken; Kyle and Wyatt Kuecker; Ryan and Jonathan Simon, along with a long list of other nephews and nieces. He was preceded in death by his parents, Earl Jack and Julia Avis Wagner, 4 brothers, Earl Jack Jr., Raymond, twins Robert and Richard and one sister, Julia Avis, his son Donald Jr. and his first great grandson, Jacob Simon. He passed away at the Aspen Hills Care facility in Pemberton NJ where he has resided for the past couple years. Calling hours for Donald and his wife Gisela will be held on Sunday, January 23 from 2:00 to 4:00 PM at the Tilghman Funeral Home, 52 Main Street in New Egypt. Burial with Military Honors will be on Tuesday, January 25 at 12:30 PM at the BGWCD Veterans Memorial Cemetery, 350 Provinceline Road, Wrightstown, NJ 08533.
Print
Sunday
23
January