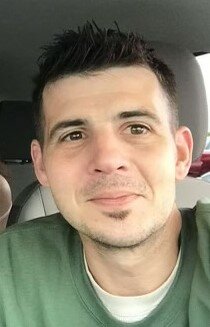 Please share a memory of Richard to include in a keepsake book for family and friends.
View Tribute Book
Richard T. “Rick” Trembula, age 39, of Cookstown passed away Saturday, May 7. Born in Mt. Holly, he was a lifetime area resident. Rick was a 2001 graduate of Bordentown Regional High School and was formerly employed by the NJ Department of Corrections as a Corrections Officer. He also worked as an electrician. Rick enjoyed karate, baseball and wrestling. He also liked kayaking and horseshoes and was a big music fan. But most of all, Rick loved to take care of his son. Rick was predeceased by his paternal grandparents, Michael and Easter Trembula and his maternal grandfather, Donald Reed and by a cousin, Shanon Newberry. He is survived by his son, Jake Trembula of Hamilton; his parents, Thomas and Robin (Reed) Trembula of Cookstown; his sister, Brittany Trembula of Bordentown; his grandmother, Evelyn Reed of North Hanover Twp.; his former wife, Kelley Thompson of Hamilton; his aunts and uncles, Karen and Jim Whitely of New Egypt, Donna Fieni of Cookstown, Sandy and Randy Newberry of Greenville, TN and Jerry Trembula of Cookstown and his cousins, Robin Tipton and husband Steve of Tennessee, Michael Fieni of Brooklyn, NY, Kelly Krausz and husband Clif of Pennsylvania, Jay Whitely of New Egypt and Brian Whitely of Florida. A memorial service for Rick will be held on Friday, May 13 at 4:30 PM at the Tilghman Funeral Home, 52 Main Street, New Egypt, NJ 08533. Calling hours will be from 2:30 to 4:30 PM at the funeral home. In lieu of flowers, memorial contributions in Rick’s memory can be made to the City of Angels NJ, P. O. 10237, Trenton, NJ 08650 (www.cityofangelsnj.org/donate/).
Print
Friday
13
May

Get Directions
Friday
13
May